To experiment with ThingLink, one of the new tools we were introduced to in our second day of Doing Digital History, I used an 1888 engraving of Mission Santa Barbara’s “sacred garden” as a base image. I then tagged it with a label and a note, and added links to images that similarly used the visual convention of the posed padre in front of the fountain. 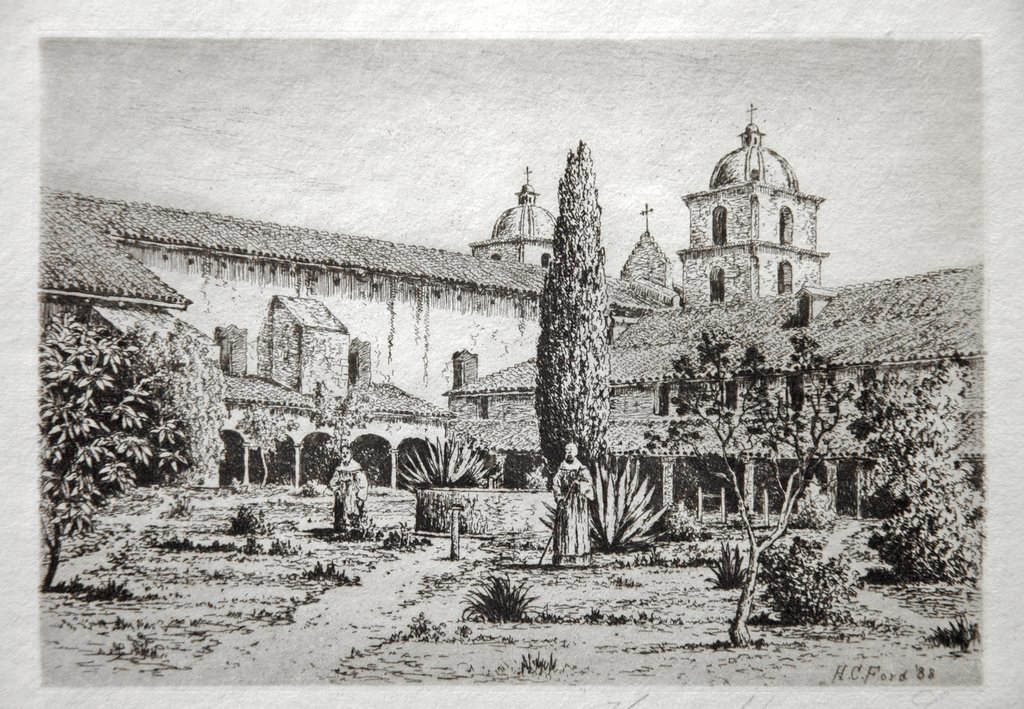 I make a more in-depth argument about the interplay of the marketing of the missions and the reception of the growing body of mission visual culture at the turn of the 20th century in my forthcoming book, California Mission Landscapes: Race, Memory, and the Politics of Heritage (U. Minnesota Press). This simple exercise in annotating images raised similar challenges as the monograph. The similarities of the visual compositions of the images are fairly obvious. But the significance of those posed figures is far more complex and nuanced than simple tags can convey. The conventions of posed “exotic” figures mirrors similar practices at the Alhambra and other iconic monuments on tourist routes around the Mediterranean. The presentation of the missions as monastic sites with landscapes reminiscent of centuries’ old European garden traditions helped to elide the Catholic parishes with the enthusiasts of both romanticizing California’s colonial origins and promoting tourism in the increasingly Anglo-dominated social and political elite of the state.

The constructed gaze of the mission gardens is evident in the assembled montage of ThingLink tags, but the historical context is less evident. How is this more cogent than a Pinterest board? And what’s the deal with the banner ad I’m apparently stuck with? I am left intrigued but not yet convinced of the potential of annotating images as a tool for engaging with visual culture. And I look forward to learning more about how others are mobilizing these tools in productive ways.